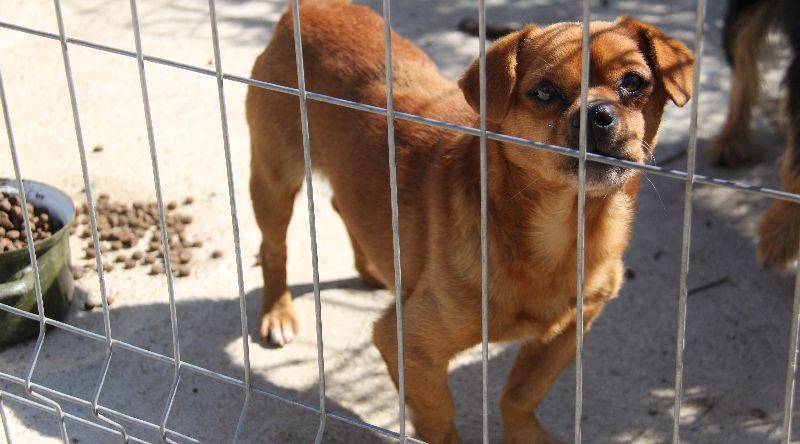 We often visit the shelters around the country, we always look around, we praise the developments because we know how much time-energy-money it takes for every little step. We share in the happiness of the successful adoptions and listen in horror to the stories of the latest arrivals. “We found him yesterday… NO!”

No, this post will not be about the scared look of a dog’s face, because it’s going to be a happy post about dogs who have gone through hell, who are a thousand years old and very long time shelter dwellers. Those who are reconciled to their fate and appreciate every ray of sunshine of a warm morning, the appearance of caregivers, their peers and their daily routine, which provides security. They don’t know what life is like on the couch or the long stroking of their owner. Because they don’t know, they don’t miss these things. All they know is that it’s much better than where they came from where they were starved and beaten.

Please allow us to take you on a virtual walk to a shelter in an end-of-the-world, backward region. It could be any shelter in Hungary, in the capital or in Mordor, subsidized or unsupported, with visible good marketing, or without marketing: the situation is the same everywhere, no one needs old dogs. When an old dog is rescued, they already know an “eternal peace” is coming, so the shelter is looking for a kennel and a kennel partner with this in mind.

Let this shelter now be the animal home of the Ugat-lak Foundation Kisvárda. Because they are exactly 10 years old, because they are really at the end of the world. Because what there is a lot of in this area is dogs to be rescued, with very little support and even less responsible owner. Because 350 dogs are waiting every morning to be cleaned, fed, given drink and get a good word or two.

We know they won’t get adopted and that they will live the rest of their lives here. We want to introduce them to you, to see what kind of eyes we looked into when the dream of the warming hut came to us.

A tiny lord weighing up to 8-10 kg and was given this name for a reason upon arriving at the shelter. He didn’t even have a name before. He looks much older than his age, still only approx. 9 years old. Small dogs are known to live up to 14-16 years. He loves people very much, he is friendly, and he was certainly born in the wrong region.

It’s hard to write a happy introduction about a dog that was a “training dog”. In this area, training dogs are used as bates in dog fights. They practice with them. When they are no longer needed, they are thrown away. He was found in a ditch. Bébi was in severe condition and needed a lot of TLC, hence the name. Even though Bébi is a male and an old man. Old as the highway. No one adopted him. His chances for adoption reduces with each day. He is now about 13 years old, blind and growls at strangers. Everyone needs to rebuild trust with him. But once he knows you he is really fun, like a grumpy grandpa.

One of the shortest, thinnest-haired dogs got this average name. He didn’t get it at the shelter. Bundi is a real celebrity in the segregation (gipsy line). Everyone knows him. It wasn’t always like that, he was also a “training dog”. Then he got tired of it once and bit off the finger of one of his “employers”. But not just a little bite. Completely off. He put all his grievances into that bite. He had to go. He ended up in the shelter. Even though he is very nice. He bears the memories of his youth, if not in his soul, but on his body. Not only his dachshund legs, give him a funny shape but unfortunately, a lot of fighting is also visible on him, he doesn’t have a single straight bone. He is 10, but you wouldn’t tell! A real rarity. Not only because of his legend but because there is no such thing as a white dachshund. 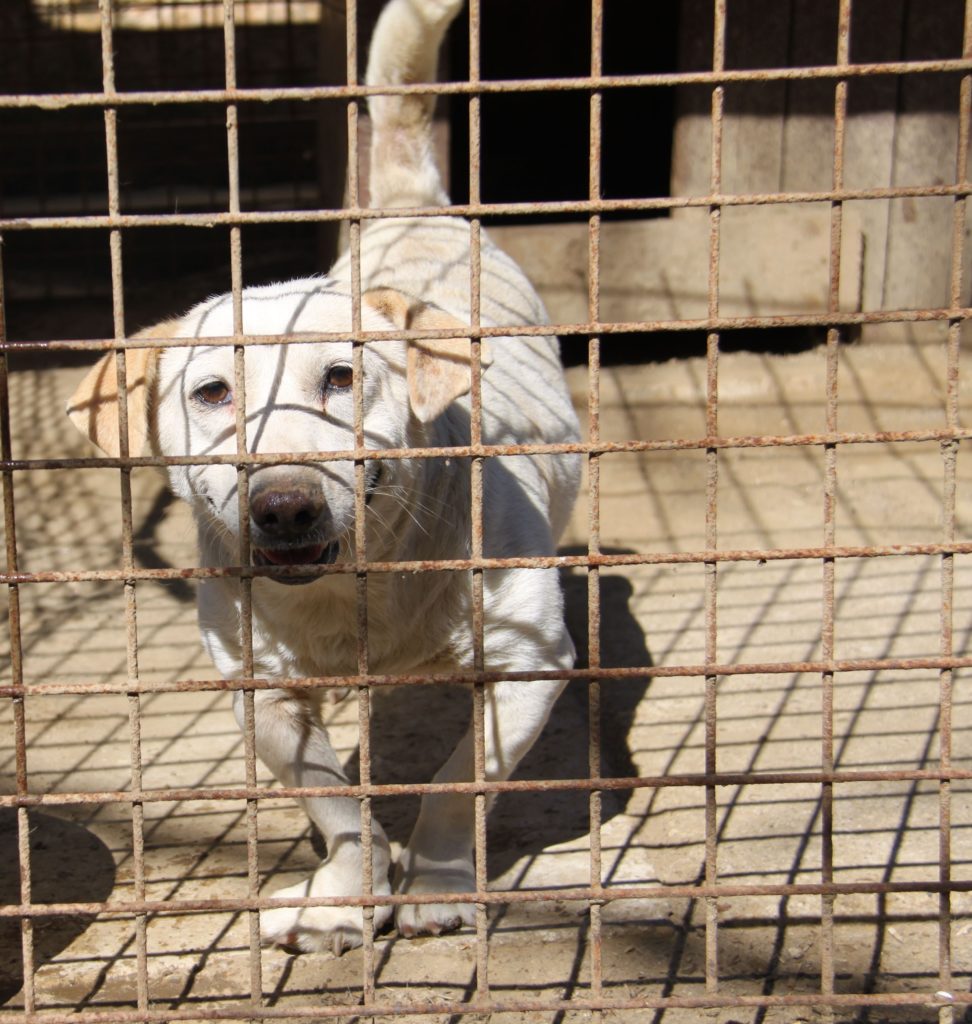 Zacsitacsi lives next to Bundi. At first glance, the same, only in a different colour. It is a real rural “yellow dachshund”, which you can rarely see in Pest. However, in this region, you find a couple of them in each bush. We can only guess where his name came from. He is also short and curvy legged. He was probably also a training dog, but we don’t know his story for sure. Because he’s not as famous as Bundi. But there are things we know: from his deformed leg, from his initial very strong distrust. Yes, we know from these that he probably had the same life as Bundi. If Bundi will never be adopted then he especially has no hope. He remains “like Bundi”.

Around 2010, the dogs began arriving at the shelter. Everything was still completely fresh then, the enthusiasm, the dream-like utopia of finding an owner for everyone. It was then, after leaving a dog at its new owner, when on the way back they saw Buksi, who was sitting in the ditch, next to the busiest road. The doctor then said Buksi was very old, over 10 years old, not in very good condition, one of his eyes was already old. That was in 2010. Are you counting with us? How old Buksi is now or how he got left in the ditch: no one knows. Maybe Buksi doesn’t even remember it anymore. 100 dogs with that name arrived after him, but he remained the Buksi. He sees almost nothing, stumbles into the house, which he is unable to heat up anymore. I think he is a real Matuzalem. Buksi really, really wants a warming hut, we know, he told us!

Beautiful, gorgeous and kind. He has a gigantic fur coat. This is what you notice at first glance. And at a second. And for the third. Maybe he doesn’t even have a bone under his fur, just his big hair and his big heart. Male, over ten years old, and very kind, very, very kind. When we imagine him with an owner, we see him laying at your feet as a fur rug, while you are watching TV. You don’t have to stroke him either, just let him touch your feet. You could watch all the episodes of Isaura he would stay with you all the way. 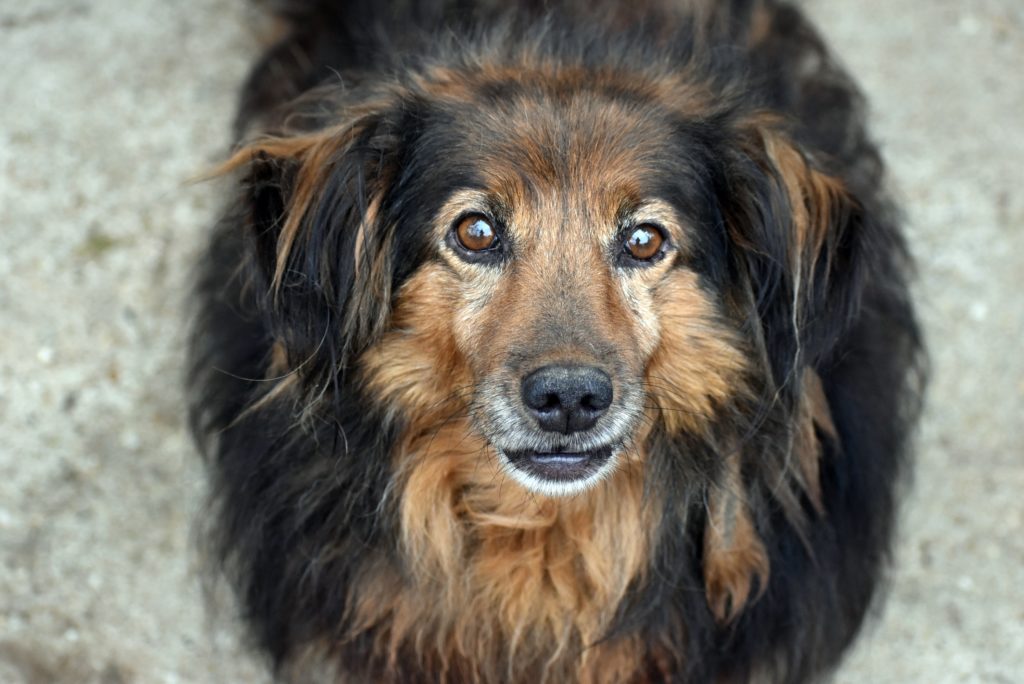 He is said to have been a husky mix at a young age. Who knows? Now he is just a mongrel, he’s just very old, and only mumbles. He’s not so much an Atos, as he doesn’t look like a former bodyguard anymore. He is just a Papa. He is around a hundred years old, without any teeth, who will only eat mushy food. He’s still a barking dog, he’s still wiggling when he sees a man, and he’s still a talker and says what he has yet to say.

Pinscher mix lovely male dog. His image will be liked by most because he is small, and cute, also because he would look good on a couch in a TV ad. He can even fit in a bag because he is no more than 4-5 kg. Well, I’ll tell you the secret as to why no one is rushing to adopt him. Because he’s old. Because he barely has any fur. He can barely stand temperatures below 25 degrees, and on those days he will not leave his house all day. He is not called Unicorn because it is unique. But because he has only one, not a horn, but a tooth…

She was collected at one of the railway sites in Kisvárda. She wasn’t alone but with a lot of soot-black puppies. When such a team arrives, one might suspect they will all remain “permanent fixture”. Then it turned out differently. Only if we would know in advance…. but we don’t. It turned out much better. The babies were all adopted. Only Szeni remained in the shelter. If we had to name a really good dog, she would be it. The typically loyal companion that you read about in storybooks. An infinitely kind dog. 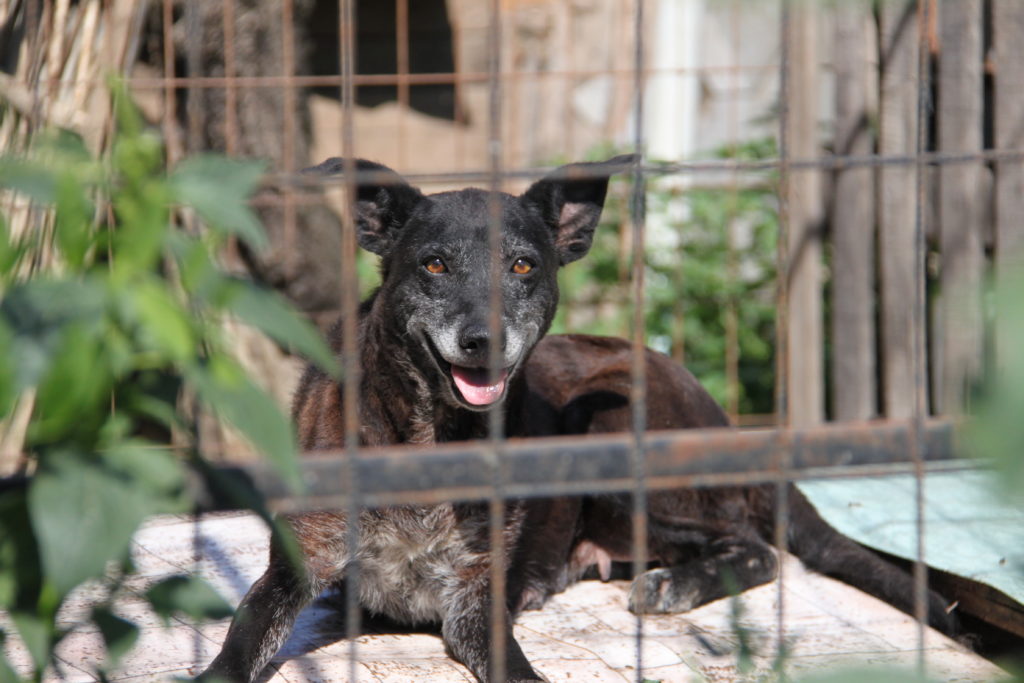 In the countryside, people still believe that an old dog is useless around the house. In such cases, they call the shelter that they prefer to leave the old dog there and would take a young one instead… Or they just simply get rid of it. But it is also very common that the dog is taken out to a field, vineyard or waste land and is left there. These people sleep peacefully because in their mind the dog is left there to die. This is a very normal thing for the children in these regions too, as they grow accustomed to this at a very young age. Their consciences are clear. This tradition is inherited for centuries, we will never break it no matter how hard we try.

But let’s return to Foximaxi. He was not a stray. According to the owner, he „went to die” 5 years ago. Only Foximaxi doesn’t know that…

Phone calls arrive daily that “we would like to give up our old dog”… The shelter should take care of it. That in itself is outrageous. But it’s not the worst of it all.

Let’s just say he wasn’t given much of a chance. Of course, the owner has been sleeping well ever since. Well, Vitéz does not. Vitéz is cold and broken, Vitéz doesn’t want any new owner because he loved those soulless people whom he served before.

Dorka was the first one we advertised as ready to be adopted. Well, she doesn’t need that anymore, because she was adopted and now can sleep in a house, which also has a garden and other doggy siblings.

She was found on a chain in a local gipsy community (segregation site). She was skin and bones, with 8 skinny puppies waiting for their mother to take care of them. She fit in nicely in the shelter. Her puppies quickly started a better life. She could be around 10 years old now. An infinitely kind, calm dog with a good nervous system. But the type that no one notices, even though she greats everybody with the utmost enthusiasm. Meanwhile, time has not been kind to her, and now she easily gets cold under her thick fur, and her joints are hurting too. She would love to be in a warming hut.

We know that chances are slim… but if anybody out there would be interested… you can inquire about the dogs at Enikő Dér, who is leading the Ugat-lak Foundation shelter in Kisvárda: 06-70-397-1795

We often hear that the dogs would rather be free and happy stray dogs than stuck in a shelter. It is a matter of point of view. Admittedly we have never seen a happy stray dog. Certainly not in these regions, but not in Budapest either. We only see abused, broken and frozen dogs.

We can’t reverse the story of these dogs, however, we can give them some tangible happiness. A warm hut.

If you are unable to adopt them but would like to help them, support our initiative:

As the cold arrives, their old bones, their health, their mobility “disintegrate”. Many in the outdoor kennels do not or only with great difficulty will survive the biggest frosts of winter.

We want to give them a warming hut, a nursing home. A REAL, LOVABLE ETERNAL HOME. Yes, to the elderly!

You can read about the complete initiative here:

Let’s say early October. Because October 1st is World Elderly Day and October 4th is World Animal Day. We keep our fingers crossed, we hope, we believe in it, we keep dreaming.